The fascinating background to the famous picture

Photographer Rocco Morabito was traveling to a job in a car on West 26th Street in Jacksonville, Florida, in July 1967. He went by some Jacksonville Electric Authority linemen who were performing normal maintenance on a utility pole.

He had the idea to pause on the way home from his assignment and attempt to take some pictures of the workers. Screams could be heard when he approached the area where the workers were working.

There had been a dreadful incident.

The lineman at the top of the pole was named Randall G. Champion.

He managed to brush one of the lines at the top of the power pole while finishing the maintenance.

The energy shot through his body, knocking him out instantly.

Fortunately, his safety harness saved him from falling, but if someone didn’t respond immediately, he would still be hanging dangerously close to death. 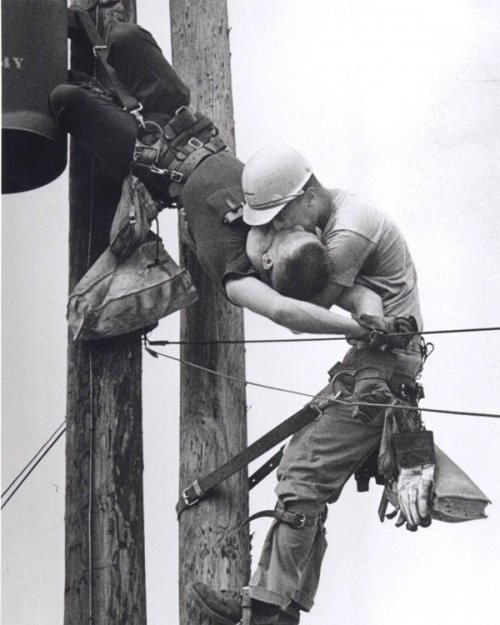 That person was J.D. Thompson, Champion’s companion, who sprinted away from a different pole some 400 feet distant.

Thompson was at Champion in a matter of seconds, but he was hanging upside down and there was no way he could do CPR.

Additionally, he understood that he was running out of time to free Champion from his harness and lower him to the ground in order to execute the procedure that would have saved his life.

The only option, in Thompson’s opinion, was to attempt to re-inflate Champion’s exhausted lungs. He sealed his lips together and blasted air into the mouth of his dead coworker while holding Champion’s head in his hands.

He used his fist to strike his chest till he detected a very slight pulse.

Thompson was aware that it was time to get his companion to the ground so that he could find help. Champion’s harness was unbuckled, and he was then carried across his shoulders as he descended the pole.